This article first appeared in German in the IT Freelancer Magazin

The term “data science” has become a buzzword in recent years, and describes an interdisciplinary field in which topics from mathematics, statistics, and computer science come together.

Broadly speaking, it is about asking questions, and then answering them in a data-based manner. Some examples of such questions are:

A Data Scientist begins with a question similar to these, and then works on collecting, evaluating, and interpreting data until the question is answered.

What does a Data Scientist do?

Hilary Mason, a former Data Scientist in a venture capital firm, and now a startup founder, wrote a blog post where she describes the activities of a Data Scientist with the acronym OSEMN:

A data scientist usually accompanies the entire workflow, from collecting the data to formulating a recommendation for action based on the findings obtained. Both the classical “hacker” skills (for example, working on the command line), as well as the understanding of algorithms from statistics and machine learning are essential in this workflow.

How does a machine learn?

This is tried to answer in the field of machine learning. Here, algorithms are developed that allow computers to derive generalizations (“rules”) from a series of data.

There are a variety of different algorithms, all of which differ in their methods, priorities, and often also in their results. A currently very popular algorithm called Random Forests is based on classification trees, which are very intuitive to understand. 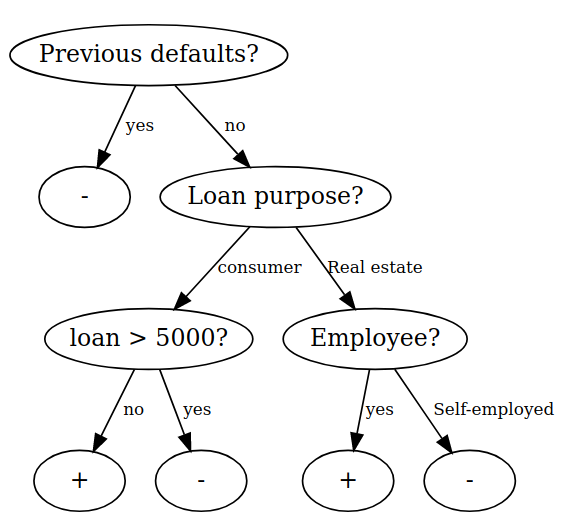 A classification tree creates a hierarchically ordered set of criteria (splits), through which new data then passes and ends up in a leaf node. There are various algorithms for calculating such a tree; among the most well known ones are e.g. CART and C4.5. The result, however, is always a tree, such as in the above figure.

A tree created in this way can now be used to make a prediction for a new credit request. If a self-employed person who has not yet had any previous failures wants a consumer credit of more than 1500 euros, we can walk through the tree and give him the credit in the end (for this person and this tree, the distinction between employee or self-employed plays no role).

This example tree was, of course, a highly simplified model. In reality, models are usually much more complex, and can be aggregated from a set of, say, 500 trees. Each single tree makes its own prediction, and in the end, the final prognosis is decided by the majority vote between all trees. This is the basic principle of Random Forests, an algorithm that is currently among the top candidates in terms of prediction power.

By making such an ensemble of many “small” models, the predictions become more robust and accurate. An additional advantage is that the “vote” among 500 trees can now output a kind of probability for the classes “+” and “-“, instead of giving only a bare forecast for the class “+” or “-“.

With powerful methods such as this one, many real problems can now be solved: