Agile software development is based on the premise that project planning is frequently overdone, since requirements change often during development, and as a result, large-scale plans are almost always wrong.

There are many good resources out there on topics like agile development and extreme programming, and I’ll provide references to some of my favorites throughout this post. But sometimes a developer works alone, for example on the beginning stages of a pet project, or as the only freelance programmer in a small team of customers. Since the basic implementations of all Agile methos (Scrum, XP, etc.) are designed for teams of 3+ people, standard agile techniques don’t work out-of-the-box and have to be modified. The purpose of this post is to summarize and organize the material I’ve found on how a solo developer can adapt and use these strategies.

This post was and will be changed and improved as I continued to tailor the method to my liking, all in the Agile fashion of “deliver fast and iteratively”.

The following figure (source) summarizes the iterative process in PXP: 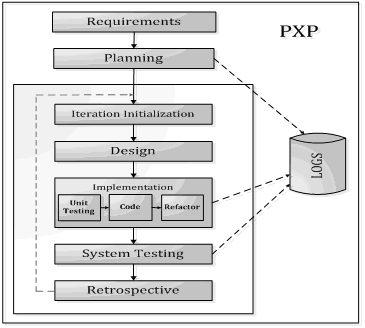 It makes sense to keep notes (called logs in the figure) during your process and write down how accurate your task planning was, how well you focused, and what could be improved in the next iteration.

To experiment with PXP and refine the method to a tailored solution that works for me, I am applying these tools to a set of programming puzzles called Advent of Code. It is a yearly recurring event in December where the author publishes christmas-themed programming puzzles in an Advent calendar style.

I’ve tried and continuously adapted the PXP method to my personal preferences during December 2017. My solutions started out as simple ad-hoc scripts, but the third day’s puzzle was already tricky enough to require a more professional approach. I thus switched to a test-driven design and went through the basic cycle of “1. write test - 2. code until test passes - 3. refactor existing code”.