While experimenting with machine learning models, I’ve recently come to enjoy the simplicity and power of OpenML and mlr.

For those new to this, OpenML is a web-based service that provides an entire ecosystem for data scientists. You can easily share and access open data sets from many domains, abstract task and model definitions, and even results shared by other people. One of the nice effects of this service is that you can upload your resulting performance measures and compare your model’s performance to other people’s models.

Secondly, The R-package mlr provides a “framework for machine learning experiments”. In short, the package serves as an interface to many other machine learning packages, with the big advantage of providing one common syntax. This allows you to quickly try out many different models from diverse packages without much syntax editing overhead. It is similar to the caret package, if you know that one. My choice for mlr is based on a personal bias, though - I have not worked with caret extensively.

I won’t do an extensive tutorial of these packages, since the existing vignette and bootcamp of OpenML and the mlr tutorial and mlr cheatsheet already are excellent resources for that. Instead, I focus on applying these packages in a case study on credit risk.

In this post, I focus on mlr and only use OpenML to download a data set. A later post, if time allows, describes a workflow using the OpenML functions and submitting the resulting model to http://www.openml.org

Get a machine learning problem

OpenML defines data objects, tasks, and runs. Data is just a data set, and nothing more. A task is an abstract representation of a problem to be solved by machine learning (it includes the name of the target variable, for example). A run then is the application of one specific machine learning model on a specific task.

Because of that, it usually makes sense to download a task instead of a mere data set from OpenML. For this analysis, we’ll use pure mlr, though, so downloading the data set is good enough:

This data set contains observations of credit applications. The variables include a person’s employment, the credit amount, the duration of the credit, and many others. The target variable is called class and represents whether the person is of “good” or “bad” credit status, where “bad” hints at a possible default of the loan. Banks then want to predict this status and base their decision on whether or not to grant the loan on the status prediction.

Of course, in a real setting you would now take some time to get used to the data. This would include summaries and plots, both univariate and multivariate.

As an example, here I’ll plot the density estimation for the credit amount, separately for the good and bad classes: 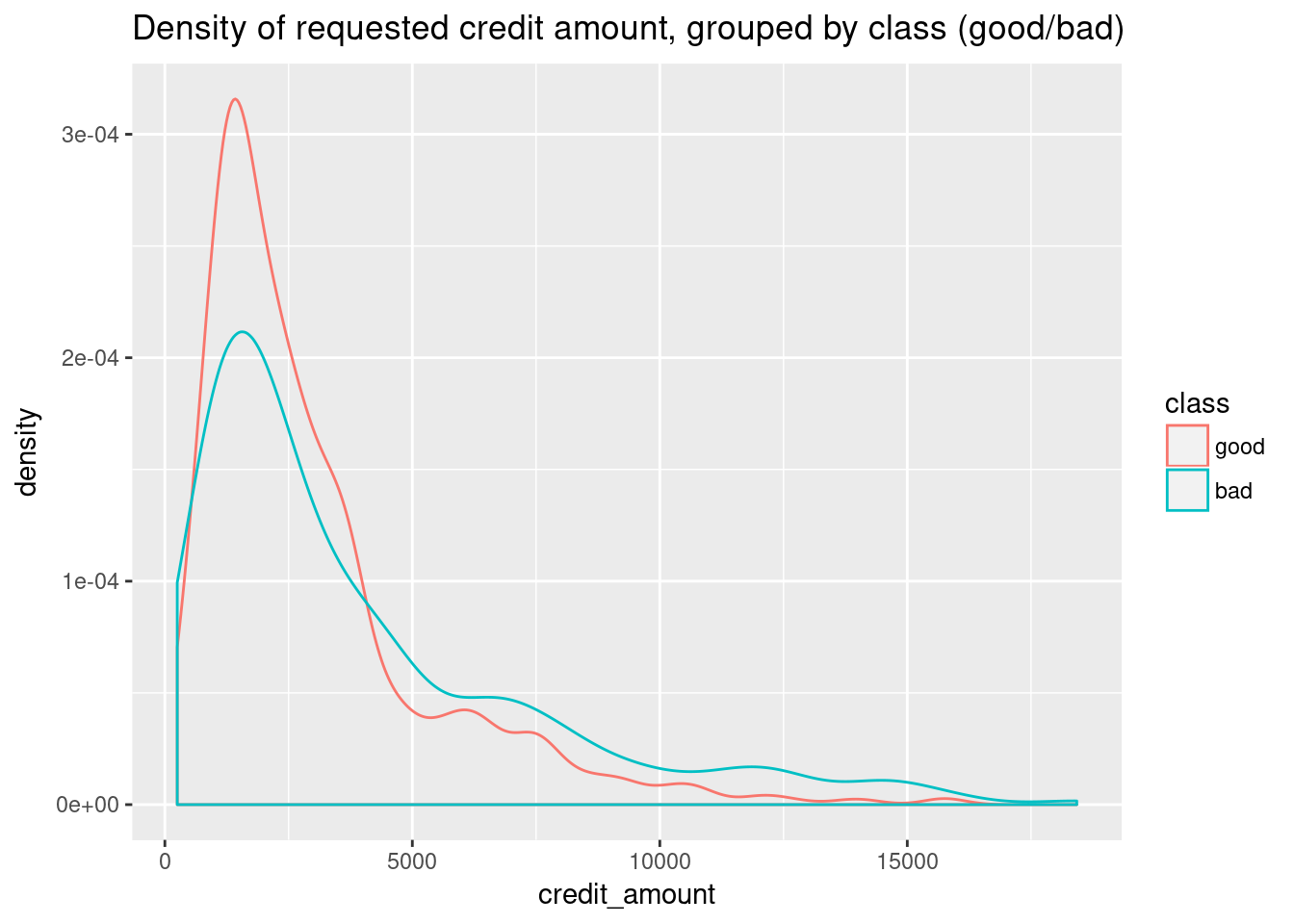 Here, you already get a feeling that higher credit amounts tend to default more often, and thus might be classified as “bad” more easily.

First, we will run a binomial regression to predict a credit applicant’s risk class.

There are two ways to proceed here. Either we run within the mlr framework, or we use the OpenML functions. I’ll stick with mlr to keep the set of introduced functions as small as possible - there might be a different post using OpenML at a later point, though.

The task contains the data set, the problem type (classification), the target variable, among others. Important is also the information which class is considered the “positive” class (here: good credit rating), since this affects how we interpret measures like the true positive rate later.

Now we are ready to train the binomial learner. We’ll also use it to predict the outcome for the held back test set, and check a few common performance measures to see how the model did:

Oh that’s not good! The false positive rate is 0.47! Here, positive means that a subject has a good credit class. This means that the FPR is interpreted as the ratio of people with bad credit that falsely get classified as “good credit”. This is fatal, since we would give out loans to almost half of the people who are actually of a “bad” credit status.

Since we only predicted a class here, we should check if a different threshold cutoff (say, 0.8 instead of 0.5) can be of help. This would mean that our model would become more conservative, in the sense that it would put more people in the “bad” class.

Predicting probability instead of class

mlr has convenient functions for plotting how a model’s performance responds to differing thresholds. We create a new task that predicts the probability instead of the class directly, and plot its performance versus the threshold probability for class="bad": 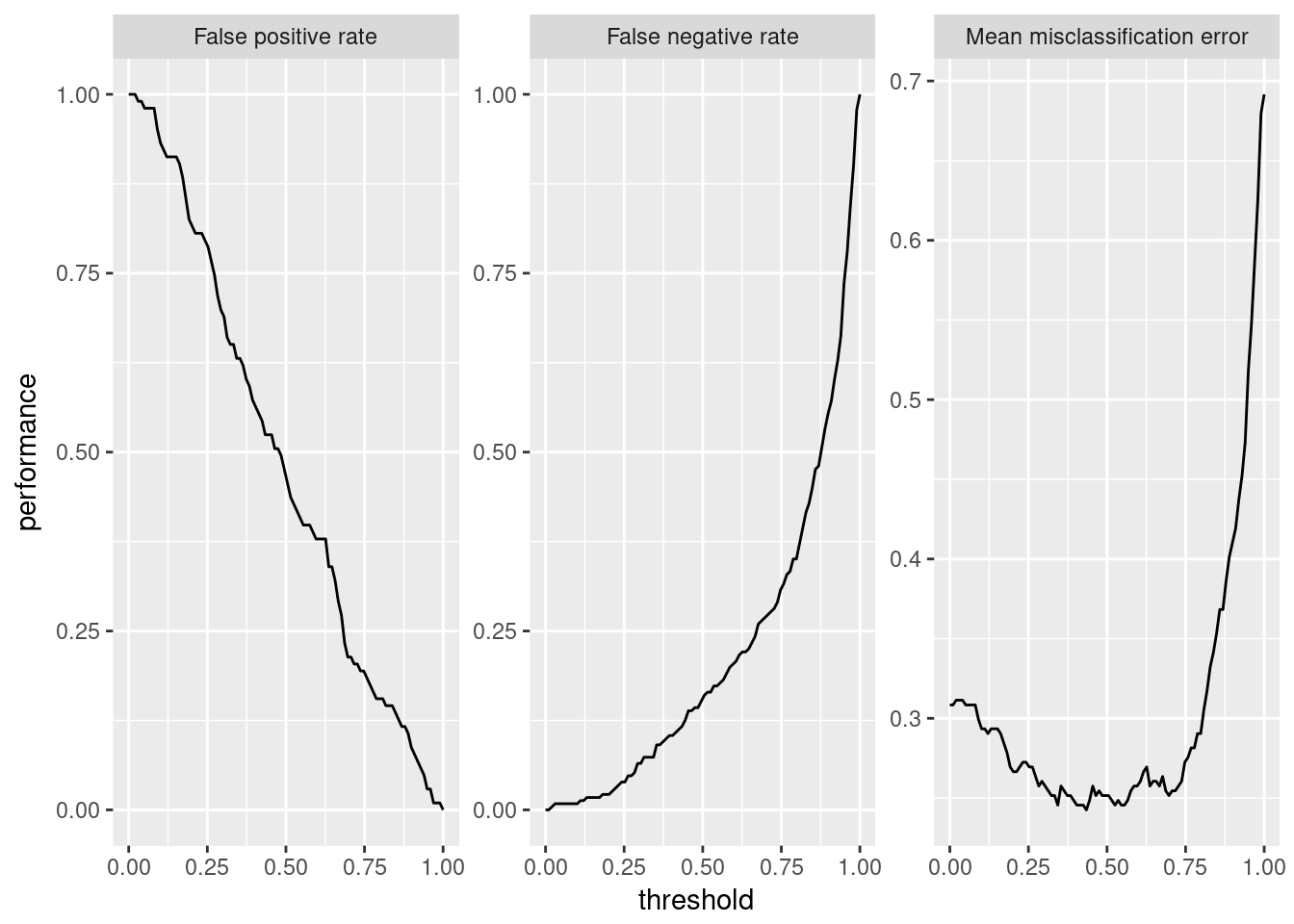 The misclassification error seems “okay” for a threshold from 0.10 to around 0.80. For us, a false positive happens when someone that is actually a bad credit gets classified as “good credit”. This ratio is more important to us, since here, we would give someone a loan that will probably default on it.

A false negative, on the other hand, would be someone of “good” credit status that we wrongly classify as “bad credit”. This mistake is also not optimal, but, financially, not nearly as bad as a false positive.

Thus, we aim to keep the FPR as low as possible while still aiming to keep a well performing model. Visually, a threshold of around 0.70 seems reasonable, since the total misclassification is still under 30%, while the FPR is now under 25%.

However, we still give out loans to one out of four people with a “bad” rating. Is there any chance for further improvement? Maybe a different algorithm, such as a random forest, provides a better performance?

Let’s compare other models’ performances. The listLearners() function shows you which models are already available in mlr:

A random forest is implemented in the classif.ranger class. This is from the ranger package, a faster implementation of random forests.

Larger tuning tasks can take up a larger amount of CPU time. Luckily, mlr works well together with the parallelMap package (it comes from the same authors). Basic parallelization of model tuning works out-of-the-box with little additional code.

In the following bit of code, we tune a random forest by performing a random search for the optimal value for num.trees, i.e. the number of trees to grow (from 100 to 1000), and mtry, the optimal number of variables to consider at each split.

So, according to a random search, it seems that a random forest with 764 trees and an mtry of 13 is the best option to proceed with (if you care mostly about accuracy).

You can even plot the effects of hyperparameters, e.g. in a heat map where missing data (and there is a lot of it) is interpolated with another random forest: 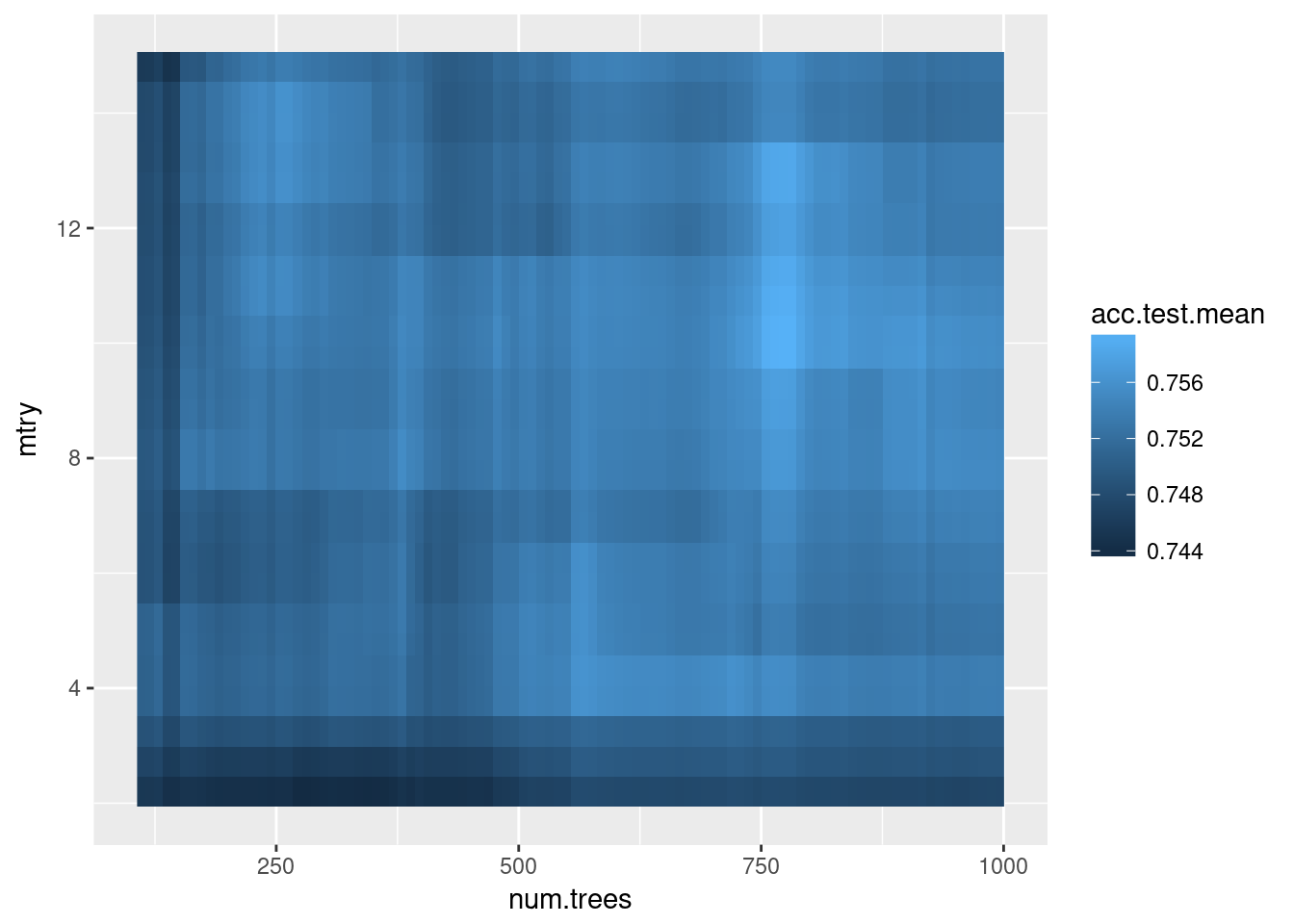 This plot would be more helpful if I had tuned on a denser grid, i.e. more than 100 random points - the interpolation is very noisy here.

Next, we’ll use the results from our tuning experiment and compare the binomial model against the tuned random forest. In mlr, the benchmark() function takes care of this:

Because for credit risk, a false positive is way worse than a false negative, we should focus on keeping the FPR as low as possible. Currently, the logistic regression model is doing a better job at this.

Earlier we saw that for the binomial classification, we should set the probability threshold up to something in the vicinity of 0.70, in order to make our model more conservative. We can do so by another convenient one-liner and benchmark the models again:

Oh look! If we set our algorithms to be more conservative (i.e., to only give out a “good” prediction if the probability for good is greater than 0.70), now the random forest outperforms the GLM with an FPR of 0.24 versus 0.32, at the cost of a slightly higher misclassification error (0.31 vs. 0.29).

We have arrived at a tuned, conservative random forest with a false positive rate of just 0.24. There is probably still much room for improvement (almost a third of all people still get misclassified), but that is outside of the scope of this short introduction. Nonetheless, I hope I’ve demonstrated the simplicity and strength of the mlr package.

Other things not touched upon in this article

This article is a first experiment with mlr and the package has much more power than I’ve outlined here. Here are some other interesting features:

Feature selection is the task of choosing a small and informative subset of input variables (features) from the data set to keep the model interpretable and speed up the learning time. In mlr, this is called filtering and described in a [tutorial article] (https://mlr-org.github.io/mlr-tutorial/devel/html/feature_selection/index.html).

If your data has missing values and you want to impute them, mlr offers convenient one-liners to impute an entire data set, either by simple functions such as the mode or the mean, or with models such as classification trees. The corresponding tutorial article describes how to do this.

Also, a more elaborate procedure for dealing with the fact that a false positive is more important to avoid than a false negative is called cost-sensitive classification. For example, the following cost matrix for the credit data set says that it’s 5 times worse to classify a person with bad risk as good than vice-versa:

The mlr tutorial (again) has an excellent article on this online.